The $523,000 grant from the Human Performance Research network (HPRnet) will be used to develop technology to improve cognitive performance and resilience 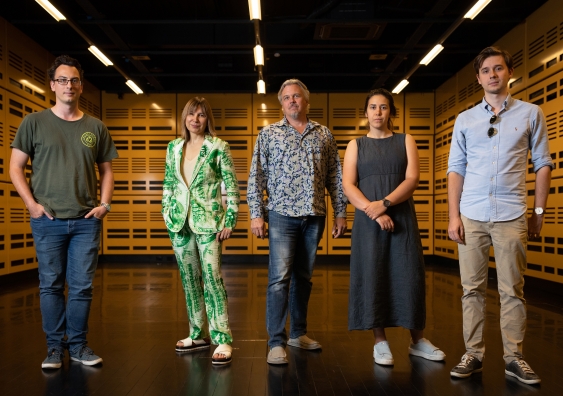 The team from the National Facility for Human Robot Interaction Research and the Creative Robotics Lab at UNSW was awarded a grant that will enhance the cognitive performance and resilience of troops in the Australian Army.

A team from UNSW Art & Design has been awarded a $523,035 grant from the Human Performance Research network (HPRnet) to develop technology that will enhance the cognitive performance and resilience of troops in the Australian Army.

The grant is part of the Defence Science and Technology’s $730 million Next Generation Technologies Fund, an Australia Defence Force initiative focused on research and development in emerging and future technologies for the “future Defence force after next.” The project is one of nine studies selected in areas ranging from cognitive augmentation, nutrition and gut health to the use of augmented reality, team training and resilience.

Professor Mari Velonaki, Director of the National Facility for Human Robot Interaction Research and the Creative Robotics Lab at UNSW, said the project aims to develop a non-intrusive working model that can identify warning signs of physical and cognitive stress in individuals and groups under critical conditions such as firefighters, surgeons or soldiers. The goal is to improve methods of rapidly distributing information to assist in task allocation and enhance team performance.

Collaborators on the project are Adjunct Associate Professor David Rye from UNSW and the University of Sydney, and Professor Katsumi Watanabe and Dr Teresa Crea both from UNSW Art & Design.

“The heart of our research is understanding people, understanding the changing human condition and understanding the situational context,” Professor Velonaki said. “If we need to use technology, we want to understand how we keep a human in the loop. We are trying to improve the interaction between humans and technology while contributing to wellbeing, safety and performance efficiency.”

Assisting troops in the Army, Navy and Air Force

The Minister for Defence Industry, the Hon Melissa Price MP, said the four-year research studies will enable HPRnet to benefit warfighters in all three services. There are now 14 Australian universities engaged in HPRnet projects.

“The physical and cognitive performance and resilience of the warfighter is critical to Australian Defence Force capability, and continuing research is the building block for achieving high levels of performance,” Minister Price said.

The project will be conducted at the National Facility for Human Robot Interaction Research at UNSW Art & Design. The Facility is purpose-designed to host a wide variety of experiments investigating how people interact with technological devices, including robots.  State-of-the-art sensors are concealed in the experiment space allowing unobtrusive measurement of human physical attributes such as location and limb position.

Internal states such as affect and intent can then be inferred from the physical measurements. The streams of time-stamped data can then selectively be logged to computer disk and/or used in real time to control technological devices in the experiment space.

While Professor Velonaki and her team have previously collaborated with the United States Department of Defense, the project marks the first time the National Facility for Human Robot Interaction Research or the Creative Robotics Lab at UNSW have worked with the Australian Army and HPRnet. Professor Velonaki said the partnership provides an opportunity to work with top researchers from different disciplines and different institutions.

“To answer difficult questions and difficult problems, it is helpful to have more than one area of expertise,” Professor Velonaki said. “It is like a puzzle that you try to put together and each of us holds a piece to go exactly in the right place. I think this is the philosophy of both the lab and the facility. We want to work with the best people in the field to be the best and achieve research that is hopefully meaningful and applicable.”